Setting the correct sample rate to allow your hardware to work at its optimal performance with your audio projects is a crucial step towards achieving a stable system. In the Microsoft Windows operating environment, there are several places along the way that can have an effect on both the quality and reliability of your audio output. Below you will find information on key areas to check and be aware of.

All AudioScience audio cards have a control that sets the card’s native Sample Rate. It’s important that you choose the best rate to match your intended use as all other settings in your system will either need to match this setting or force the signal to be converted to/from this rate at some point in its path. You can find this option in ASIControl. Click the “ClockSourceIn” control and set the “Local Rate” and “Clock Source” options to match your needs. For AES/EBU inputs, you can set the source to get its clock from an external AES/EBU input or use the Local clock.

When you install an AudioScience card in Windows, your system will create Playback and Recording devices equal to the number of “Players” and “Recorders” you see in ASIControl. These are the “WDM” devices that are routed to and from the physical inputs and outputs on your particular hardware. ”Player 1” will show up as the first ASI device in the Windows “Sound” applet on the Playback tab. You should see 1 Windows device for each “Player” and “Recorder” enabled on the card (the number is based on the card’s current operating “Mode” and can vary). Below you will see a card in “4-Play” mode with 4 Players and the 4 associated Playback devices in the Windows Sound applet. 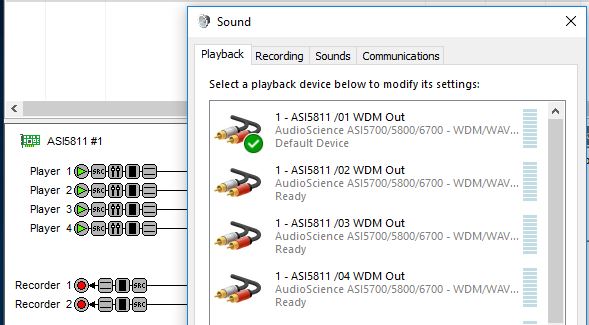 Windows creates these devices for you to use with your various software and sound applications. One crucial step that many people miss when setting up their system is that these devices also have their own options for sample rate, number of channels and bit depth. You can reach these options by right clicking a device and choosing “Properties” from the list. Then click the “Advanced” tab to see the Default Format Windows uses for each device. Expand the drop down list for the options available like below: 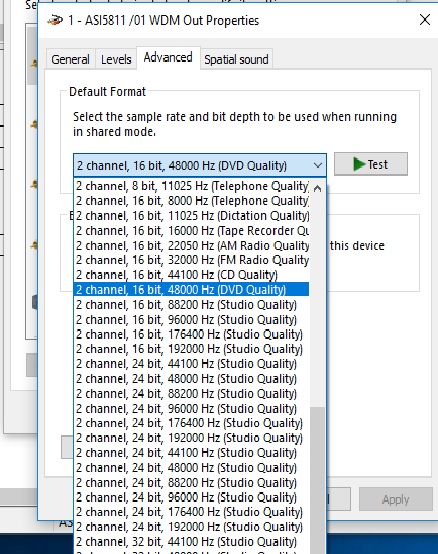 Generally speaking, these should be set to match whatever you set the card to in ASIControl by default. But there are many ways in which these can be changed so sometimes you may notice these are set to a different rate than you intend to use. Best practice is to make sure that ALL of the devices are set to use the same rate that the card is set to (each device, both record and play has this tab and these options available) otherwise at some point in the audio chain, something will be converting this signal and that is usually where errors start to creep in (drop-outs, “glitches” or just poor audio quality).

For example, say you have the card set to 48kHz and you are recording a 48kHz file in your audio applications. But for some reason the WDM Windows Recording device you are using is set to 44.1kHz in the Advanced tab. So what happens is the signal comes into the card at 48kHz, gets converted to 44.1kHz by the Windows Record device and then gets converted back to 48kHz by your audio application. Clearly that’s not the most efficient way to achieve a stellar 48kHz recording. While in most cases this should work fine, unless there is some reason you need to do this it’s simply not the best practice to have the file convert back and forth. While this is certainly technically doable in isolated instances, the more you are stressing your system and your hardware (say by using all of its devices at the same time) the more likely you are to cause drop-outs as the system struggles to keep up with all the converting.

Bottom line is whenever possible you should make sure the Windows devices are set to the same Sample Rate as the hardware is set to in ASIControl.

So far we have discussed how to set sample rates at both the hardware level and the virtual device level. But there is one more place we need to pay attention too, your software. Almost all audio software these days will have options for setting the rate at which you wish it to play and record. Ways to set this vary substantially across different software. Often this will show as a “Project Rate” or “System Rate” or simply “Sample Rate”. This is the rate at which the software itself will operate. As in above, if this is set differently than the card and Windows is set, then sample rate conversion (SRC) WILL be happening somewhere in the system (most likely by the software itself).

Not only will most software offer a project rate, you may also be able to play and record at a different rate within the project. Below is an example of Audacity set to a Project Rate of 48kHz but with a 44.1kHz file loaded for playback.

Again, while this will work, keep in mind that SRC is happening somewhere and that COULD introduce issues if your system is stressed in any way.

S
Steve is the author of this solution article.

Did you find it helpful? Yes No

Send feedback
Sorry we couldn't be helpful. Help us improve this article with your feedback.